FINANCIAL ADVISOR AT DAY, HANDBALL PLAYER AT NIGHT: BENGHANEM DOES IT ALL AT POLAND/SWEDEN 2023

Returning to the IHF Men’s World Championship for the first time since 1961, the Netherlands confirmed that they are one of the emerging powers in Europe, delivering another good championship one year after finishing on the tenth place at the EHF EURO 2022.

The Dutch side, with a new coach in Sweden’s legend Staffan Olsson at the helm, might sneak into the top 10 at Poland/Sweden 2023, too, if they snatch a win against Serbia in the last game of the Main Round Group III in Katowice.

But even if they do not seal that final win, their performance has been special, hitting plenty of milestones in the tournament – their first win in history, their 100th  goal in the competition and progressing for the first time from the preliminary round.

Sure, when talking about the Netherlands, all eyes are on Luc Steins and Kay Smits, their two stars, who are featuring prominently at club level for France’s champions, PSG Handball, and Germany’s champions, SC Magdeburg, respectively.

However, there are other stories to be told from this exciting new squad on the block, like Samir Benghanem’s. The 29-year-old line player has been an integrant part of the Netherlands’ success in the last years and has been in fine form at Poland/Sweden 2023, too, with 15 goals, six assists, four steals and four blocked shots, impressing on both sides of the ball.

The catch? Well, while Smits and Steins are featuring in the top competitions in the world week in, week out, Benghanem is playing for Dutch side Green Park/Handbal Aalsmeer, mixing handball with his day-to-day job – the one of a tax advisor at a major financial firm in The Hague, the Dutch administrative capital and financial centre.

Read more on the IHF Page 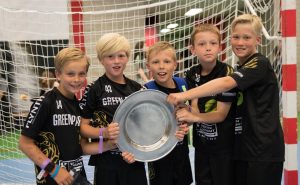 This website uses cookies to improve your experience while you navigate through the website. Out of these cookies, the cookies that are categorized as necessary are stored on your browser as they are essential for the working of basic functionalities of the website. We also use third-party cookies that help us analyze and understand how you use this website. These cookies will be stored in your browser only with your consent. You also have the option to opt-out of these cookies. But opting out of some of these cookies may have an effect on your browsing experience.
Necessary Altijd ingeschakeld
Necessary cookies are absolutely essential for the website to function properly. This category only includes cookies that ensures basic functionalities and security features of the website. These cookies do not store any personal information.
Non-necessary
Any cookies that may not be particularly necessary for the website to function and is used specifically to collect user personal data via analytics, ads, other embedded contents are termed as non-necessary cookies. It is mandatory to procure user consent prior to running these cookies on your website.
OPSLAAN & ACCEPTEREN
Tickets bestellen